Regrets of the Past 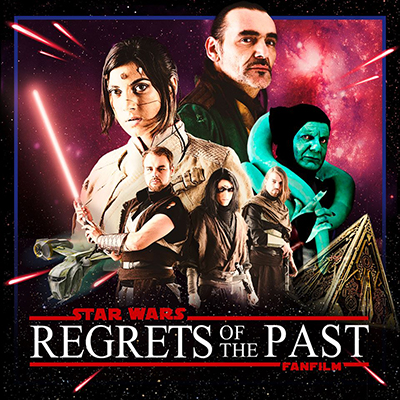 Ask someone what they think about fan films and they will most often describe clumsily produced, awkwardly acted and badly filmed parodies of much loved movies. Indeed, Youtube is home to thousands upon thousands of such films; home made videos of teenagers running around the woods with plastic lightsabers, impersonating their favourite characters from the Star Wars universe. When I was asked by a colleague to step in to help make an Austrian Star Wars fan film, I was initially quite skeptic.

I met Bernhard (Weber – Director of RotP) over a beer one cold November evening in  2014 and I quickly realised that this wasn’t going to be an amateur production. He was very motivated and extremely eloquent about the story and his passion for film making, and had already collected together over a hundred industry professionals internationally who had given their time for free to help realise the project. Needless to say, I was immediately caught up in his excitement of the project and offered my services to score the film.

I began by immersing myself in the story (by Maria Hinterkoerner/Daniel Trauner) and it’s myriad characters and themes. It was obvious from the very beginning that the score would need to centre around strong orchestral leitmotif devices, just as John Williams’ space opera compositions underpinned the original dramatic Star Wars saga. I too wanted to compose an epic soundtrack for RotP, rich in character themes and classic Hollywood orchestrations, albeit with limited resources and without a hundred piece symphonic orchestra.

Bernhard and I agreed early on that I would be free to develop my own ideas for the score, and as we wouldn’t be using and of John Williams’ music this meant composing close to an hour of bespoke original music.

In addition to programming a synthetic orchestra from sound library plugin software (thank you ProjectSAM for the incredible tools), I needed an organic quality to give the score a realistic edge. To this end, I assembled a large choir made up of cast and crew from RotP and we spent a day recording with sound engineer Andre Schwarz at Noisia Studios, near Vienna. We had a lot of fun working on the choir recording and the results were used extemsively in the soundtrack.

The final part of the process was to mix the score, this was expertly accomplished by Kurt Richter at the Musikzimmer Wien, an excellent project studio where we often record and mix for our film music projects.

It was a truly rewarding experience and an absolute joy to work on RotP with Bernhard and his wonderful team. I hope you enjoy listening to this soundtrack and may the force be with you… always.